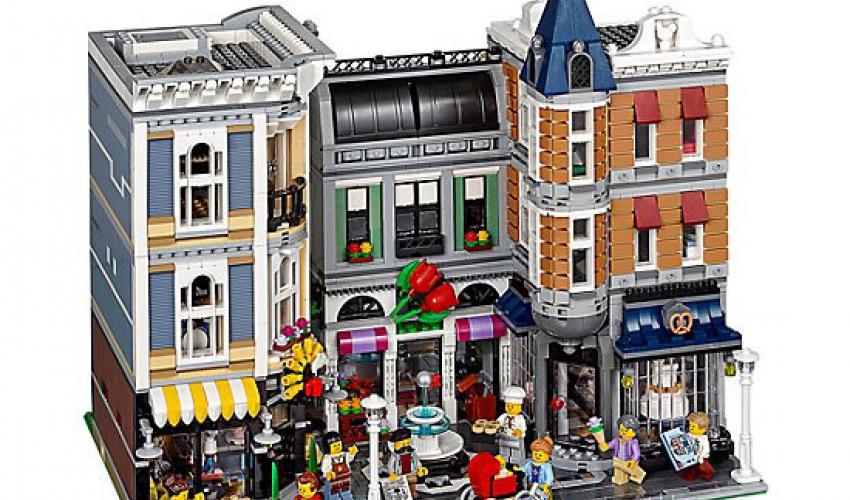 The word ‘Lego’ is short for two Danish words ‘leg godt’ meaning ‘play well.’ Founded in 1932 by Ole Kirk Kristiansen, Lego has been encouraging us to play well by building. It’s often astounding how many imaginative and realistic things you can build with Legos. The company is constantly innovating and providing us with new ideas and pieces to keep creating, like when they launched the Lego modular buildings line of figurine and blueprints.

Each Lego modular building contains more than 2,000 pieces. These sets are so popular they have become the inspiration for some serious mega Lego constructions and replicas. As a modular company, we love seeing miniature modular creations. Here are seven of our favorite Lego modular buildings.

1. Café Corner. Who wouldn’t want a quaint, little corner café in the middle of town? Constructed from 2,056 pieces, this café was originally designed for builders of ten years and over. It’s a 3-story corner building with several noteworthy features, including:

2. Market Street. Released in 2008, Market Street was the creative design of Lego fan Eric Brock. He had been a fan as a child and rediscovered his love for Legos. His design included many Dutch and Belgian elements.

3. Grand Emporium. A couple of years later, in 2010, the Grand Emporium was released. It was a life-like 20th-century department store, and it had fun elements like:

4. Brick Bank. The Brick Bank has a bank (obviously), secretary’s office, bank manager’s office, Laundromat, and detailed façade with a sidewalk. There are a lot of intricate features in the bank, including play features like its ‘laundering money’ feature. When you place coins in the Laundromat, the Lego money bills or coins fall into a unique vault in the bank.

6. Ninjago City. Perhaps not strictly considered a part of the modular buildings series, it still is a contender for one of the most-loved buildings and has modular features, like its stud baseplate and building connectors. Each of its three floors is based on an Asian-styled theme – an old-fashioned fish market, comic store, sushi restaurant, and even an Asian style restroom. It comes with 16 figures.

7. Downtown Diner. The newest modular design was released in January 2018. It is based on a 1950s-style diner, complete with a gym, recording studio, and car. You even get six mini figures: chef, waitress, boxer, rock star, manager and a bodybuilder.

Lego modular buildings have been the inspiration behind many mega Lego constructions. There’s a Lego Kennedy Space Centre made from 750,000 Lego bricks, which took more than 2,500 hours to make. Several Lego-themed parks like the Legoland Deutschland located in Gunzburg, Germany and the Lego Sport City display in Hong Kong all display massive Lego structures.

With its precise, yet flexible design, Lego construction is similar to real life modular construction. At Mobile Modular, we deliver and install modular buildings for many different industries like construction, retail businesses, and schools. And why not? Whether we are setting up modular office spaces, schools, diners or retail spaces, we are living out the real-life Lego building dream!